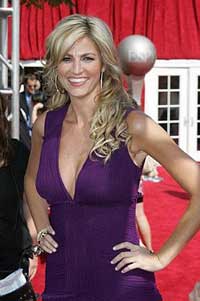 Michael David Barrett faces federal charges of interstate stalking for taking the videos, posting the videos online and trying to sell them to celebrity Web site TMZ, the FBI said in a statement. He's scheduled to make an initial court appearance Saturday morning in U.S. District Court in Chicago.

The charges were filed in Los Angeles, where TMZ is based. Andrews is identified in the federal complaint as E.A. Barrett, 48, was arrested after returning from a trip to Buffalo, N.Y., authorities said.

Seven of the eight videos posted online were taken through a modified door peephole while the 31-year-old Andrews was alone and undressed in hotel rooms in Nashville, Tenn., in September 2008. Investigators believe the eighth video was taken in a hotel in Milwaukee in July 2008, The Associated Press reports.

Andrews works as a sideline reporter traveling around the country covering college football games. Barrett will have his first court appearance in Chicago at 10 a.m. (11 a.m. ET) Saturday, authorities said.

The maximum penalty for the charge of interstate stalking is five years in federal prison, the FBI said, CNN informs.

According to hotel records, Barrett was staying in the room next to Andrews -- under his own name -- at the same time she was there. The FBI said he even asked "specifically for a room next to [Andrews]."

The complaint also says the FBI believes he used a cellphone camera to record the video. All told, seven videos were recorded at that hotel and another was recorded at a different hotel, New York Post reports.