Lauren Conrad's Novel "L.A. Candy" to Be Turned into Movie

Wednesday it was announced that the producers behind "Twilight" would be turning Lauren Conrad's novel, "L.A. Candy," into a movie. And although the novel isn't directly based on her life on "The Hills," there's a good chance that some of those characters are based on her friends from the show. 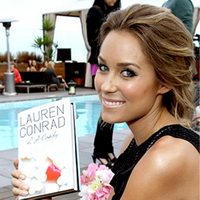 Lauren Conrad's Novel "L.A. Candy" to Be Turned into Movie

"I would probably say Queen Latifah. I love her. I really love her," she told MTV News back in August. "Someone more in my age ... does that mean Christina Applegate is too old to play me too? OK, Ashley Tisdale," MTV.com reports.

It was also reported, the novel is about a 19-year-old girl who moves to Hollywood and ends up as the lead in a reality series. In other words, it's basically inspired by the real-life adventures of Conrad, who began starring in Laguna Beach around the age of 19, then got her own show two years later. The Hills, of course, is a reality show about a group of attractive Los Angeles young adults who go about their lives as if they're living a soap opera, People Magazine reports.

News agencies report, the story is strikingly similar to that of Conrad.

"Lauren, who became an icon in that reality show world, came to us with a structure of how to tell the story in an interesting fashion that was separate and apart from the book," said Marty Bowen, a partner at Temple Hill. "We loved her take.

"Her book is an honest portrayal of what it must be like to set out to be normal, then sign on to become famous and eventually realize, wow, this isn't at all what I'd planned for myself," Bowen adds, New York Daily News reports.