The simplest looks on the catwalk, which was lined with the Lauren clan and Janet Jackson, were the floral dresses that featured sweet, delicate floral prints reminiscent of those farm wives wore in the 1930s. Denim was more dominant than usual with silhouettes ranging from a tailored, suit-style jacket to rolled-ankle work jeans. 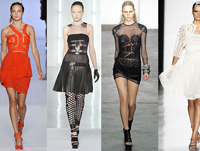 The real highlights were the outfits that somehow seamlessly mixed the two worlds of luxury and the everywoman, like a pink gauze gown with silver embroidery worn with an indigo-colored striped jacket.

With a rain spray, wind machine, spotlights and a staircase incorporated into his catwalk, Mizrahi even sent out one model in a golf cart wearing a black-sequin shorts suit — and a white top hat, of course.

The eveningwear is what sparkled: A strapless black cocktail dress with a giant white rose on the bustline, and a fluted gown covered in black lace and tufts of tulle, both captured classic Mizrahi and his theme of a retro country club.

The design duo of Jack McCollough and Lazaro Hernandez had plenty to keep the fashion flock — including Leighton Meester and Courtney Love — buzzing. The first set of skirts and dresses had the jacket-tied-around-the-waist look with the silhouettes permanently fixed with zippers and buttons on the backside.

Skirts were often paired with navy tailored jackets with very sculptured shoulders, an evolution of a current trend.

Next up were short shift dresses that alternated feathers and tinsel at the hemline. Some had a feather print to boot, others had a variety of prints that looked like tropical fish or reptiles in unexpected and brighter-than-normal colors for this label.

Then came the lingerie-inspired cocktail dresses, some with bra tops and cutout midriffs — another Fashion Week trend — and tiers of mini ruffles as the skirt.

The bouncy, youthful dresses in the spring collection Sui presented Wednesday were born from the designer's love of the 1967 movie "Doctor Dolittle." The Victorian circus was the most inspirational part of the film, she said. That came through in bow blouses, and cropped-pants and shorts suits, albeit shrunken ones.

A handful of preppy cableknit tennis sweater looks didn't seem to quite fit the theme, but they were cute anyway.

Anyone who follows Sui's look knows she is a bit of a '60s junkie — it came through this season in mod-shaped shift dresses and psychedelic colors, especially purples, yellows, greens and turquoise blue. Most of the outfits captured the optimistic vibe that Sui said she thinks the industry — and consumers — are ready for now.

The greatest feat was a black-and-white duchesse satin strapless gown folded like a fan in the front and with a fully laser-cut skirt.

The Asian aesthetic was carried throughout most of the collection, including an oyster-colored, hand-painted floral obi coat and an embroidered obi jacket, worn with black evening shorts. Chapman also played with some sheer fabrics, often in a nude color, which ended up a game of strategic peek-a-boo. The Associated Press reported