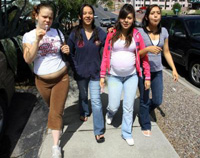 In the study, researchers compared U.S. Centers for Disease Control and Prevention data on teen birth rates with data from the Pew Forum's U.S. Religious Landscapes Survey. A state's level of religious belief was determined by averaging the percentage of respondents who agreed with the eight most conservative opinions in the survey, such as "Scripture should be taken literally, word for word."

The study appears in the Sept. 16 online edition of the journal Reproductive Health.

"The magnitude of the correlation between religiosity and teen birth rate astonished us. Teen birth is more highly correlated with some of the religiosity items on the Religious Landscapes Survey than some of those items are correlated with each other," study author Joseph Strayhorn, an adjunct faculty member with Drexel University and the University of Pittsburgh, said in a news release from the journal's publisher.

"Our findings by themselves do not, of course, permit causal inferences. But, if we may speculate on the most probable explanation, we conjecture that religious communities in the U.S. are more successful in discouraging the use of contraception among their teenagers than they are in discouraging sexual intercourse itself," Strayhorn said. U.S. News and World Reports reviewed the article.