Johnny Depp surprised the audience of Walt Disney Co.'s D23 Expo in Anaheim by sailing on stage in his famous pirate regalia. 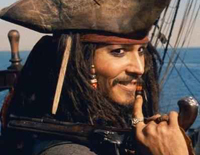 As 5,000 fans jumped to their feet, the star emerged in full character, with his bleary ballet of the forever besotted Jack Sparrow.

Disney executive Dick Cook played the straight man for the short presentation and it was the least he could do: The "Pirates" franchise has pulled in more than $1 billion in domestic box-office alone and Depp is also on tap for a fourth, "Pirates of the Caribbean: On Stranger Tides" in 2011. Depp is also starring "Alice in Wonderland" and "The Lone Ranger" for the Mouse House.

Depp arrived on stage in gliding replica of the Black Pearl pirate ship and, before they saw his famous face, the crowd was cheering at the sight of his silhouette behind a billowing back-lit sail and pumping stage smoke.

Depp was the big finale in a program that featured appearances by John Travolta, Nicolas Cage, Tim Burton and a performance by Miley Cyrus. Check back here more details on the program, as well as info on Guillermo del Toro's newly announced venture with Disney and Pixar, Los Angeles Times reports.