A black couple from Brazil have a pretty typical family with five growing children — but there's one thing that sets them apart: Three of their kids have white skin. 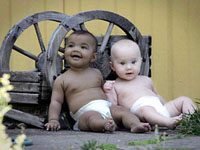 Rosemere Fernandes de Andrade, 27, and her partner Joao have two children who are black and three children who suffer from albinism, the U.K.’s Daily Telegraph reported.

Genetics professor Valdir Balbino, of the Federal University of Pernambuco in Brazil, said the condition was especially rare considering both parents and two other children are black. He also said both parents must carry the albinism gene.

Albinism is mutation of several genes, which results in little or no production of the pigment melanin, according to the Mayo Clinic. The type and amount of melanin your body produces determines the color of your skin, hair and eyes. There’s no cure for the condition, which also causes problems with the development and function of the eyes.

People who suffer from the disorder must also take steps to avoid too much sun exposure, which involves wearing protective clothing, eyewear and applying sunscreen – something that worries Fernandes.

Complications associated with albinism include both physical and emotional challenges. One of the most serious complications is the risk of sunburn and skin cancer, the Mayo Clinic said on its Web site.

F  ernandes, who lives in a slum in north-east Brazil, said her children Esthefany Caroline, 8, Ruth Caroline, 10, and Kauan, 5, have also been teased about their skin by fellow students.

T  he mother of five has also been challenged by security guards who insisted she could not be the children's mother, according to Fox News the report.