A boy allegedly abducted in a custody dispute nearly two years ago has turned up alive, hiding with his mother in a small, specially built secret room at his grandmother's Illinois home, investigators said. 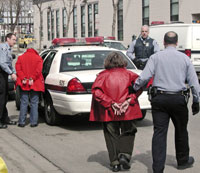 Richard "Ricky" Chekevdia, who turns 7 on Sept. 14, was in good spirits and physically fit after being found Friday by investigators with a court order to search the two-story rural home in southern Illinois' Franklin County, about 120 miles southeast of St. Louis.

The boy's mother, 30-year-old Shannon Wilfong, is charged with felony child abduction. The grandmother, 51-year-old Diane Dobbs, is charged with aiding and abetting. Wilfong remained jailed Saturday on $42,500 bond in Benton, Ill., where Dobbs was being held on $1,000 bond. The women did not have attorneys listed Saturday in online court records, The Associated Press reports.

While police have said Diane Dobbs' house was full of hidden nooks and secret rooms where Richard "Ricky" Chekevdia was hidden from the world, Dobbs told "Good Morning America" that "in two years time, [the boy spent] maybe five minutes" in the crawl space.

"My grandson had the run of the house, when we were outside we would go fishing, we would do weenie roasts, we've done fireworks on the 4th of July, he's helped me plant my flower garden in the back" Dobbs said in an exclusive interview from Marion, Ill, ABC News.

He disappeared with his mother in 2007. The small room is only 12 feet long and about as high as a washing machine. Police say he was never allowed outside. Ricky remains in police custody and no word if he's been told about his father. His mother and grandmother now face one to three years in prison, NECN reports.