Actress Anne Heche has trashed her ex-husband on national television, accusing him of being a "lazy-ass". Heche was married to former cameraman Coley Laffoon from 2001 until March, and he has custody of their 7-year-old son, Homer. 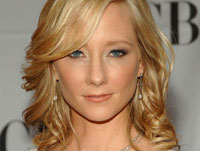 Calling Laffoon "lazy ass," Heche derided what he does for a living: "He goes out to the mailbox, and he opens up the little mailbox door and goes, ’Oh! I got a check from Anne! Yea!’", The Times informs.

Anne Heche had a bitter divorce from Coley Laffoon. The ugly legal battle finally ended, leaving their son, Homer, 7, with his dad.

But the feud continues, according to Ellen DeGeneres' ex-lesbian lover who stars in Ashton Kutcher's "Spread."

"It's funny because you can't quite let go of the ex," Anne tells David Letterman after making fun of her husband's plans to coach soccer.

When asked what Laffoon does for a living, the actress talks about the child support she has to pay him, $3,700 a month, informs Los Angeles Times.

Laffoon is none too pleased with her remarks.

He tells Us Weekly, "After coming home from showing two different clients two different condominiums, I was disturbed to see Anne taking out her personal frustration on the father of her child on national television." Laffoon, 35, sells real estate for Hilton & Hyland in L.A.