Author Dominick Dunne, who told stories of shocking crimes among the rich and famous through his magazine articles and best-selling books including "Another City, Not My Own," about O.J. Simpson's murder trial, died Wednesday in his home at age 83. 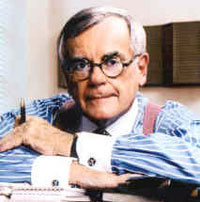 Dunne's son, Griffin Dunne, said in a statement released by Vanity Fair magazine that his father had been battling bladder cancer. But the cancer had not prevented Dunne from working and socializing, his twin passions, The Associated Press reports.

In September 2008, against his doctor's orders and his family's wishes, Dunne flew to Las Vegas to attend Simpson's kidnap-robbery trial, a postscript to his coverage of the football great's 1995 murder trial, which spiked Dunne's considerable fame.

In the past year, Dunne had traveled to Germany and the Dominican Republic for experimental stem cell treatments to fight his cancer. He wrote that he and actress Farrah Fawcett were in the same clinic in Bavaria but didn't see each other. Fawcett, a 1970s sex symbol and TV star of "Charlie's Angels," died in June at age 62, CNS News informs.

But Dunne didn’t just write about the nexus of celebrity and crime, as he did in his witty Vanity Fair reports on the O.J. Simpson trial or Princess Diana’s death. He also lived it: While Dunne was composing his 1985 novel The Two Mrs. Grenvilles (inspired by a real society murder case from the 1950s), his 22-year-old daughter, Poltergeist actress Dominique Dunne, was murdered by her former boyfriend. (The culprit, John Sweeney, was convicted of voluntary manslaughter and served less than four years of a six-year sentence.)

Dunne traced his interest in celebrity to a childhood trip to L.A. with his aunt, but he spent much of his life hobnobbing with A-listers. His brother, John Gregory Dunne, became a noted novelist (and husband of the writer Joan Didion). He earned a Bronze Star for heroism in WWII’s Battle of the Bulge. As a student at Williams College, he appeared in plays with future Broadway legend Stephen Sondheim. He moved in Hollywood circles as a director, TV executive, and producer of movies like 1970’s The Boys in the Band. But after struggling in Hollywood, he found his true calling rather late in life as a writer: He published his first book, The Winners, in 1979, Entertainment Weekly informs.