The 83rd birthday anniversary of the leader of the Cuban Revolution, Fidel Castro, was marked with the opening of a photo exhibit at the Hotel Nacional in Havana. 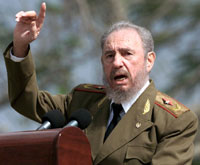 The inauguration of the exhibition, made up of 83 photos showing different moments in the life of the revolutionary leader, was attended by the president of the Cuban National Assembly (Parliament), Ricardo Alarcon, who said that "we should congratulate each other for the exceptional fact that the Cuban people have someone who symbolizes their best features," Escambray reports.

Fidel Castro appears healthy in two new pictures taken less than two weeks ago by a group of US clerics belonging to the Pastors for Peace group and posted on their website.

The revolutionary leader has been out of public view for three years after stepping down for health reasons and handing power to younger brother Raul Castro.

However it is believed tha tthe former president is still consulted on major decisions but his role in day-to-day government of the island is unclear, FOXNews reports.