Steven Spielberg will direct a new movie version of Harvey, Mary Chase's Pulitzer Prize-winning 1944 play about a man and an invisible giant rabbit. 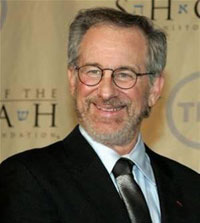 The Hollywood Reporter says the film will be a co-production of DreamWorks and 20th Century Fox, the companies' first teaming since Minority Report.

The new version of Harvey was written by novelist Jonathan Tropper, The Malaysia Star reports.

Meanwhile, it's not Spielberg's first time working with hare-raising material. He produced the bunny-trailblazing "Who Framed Roger Rabbit," an early effort in combining live action and animation, in 1988, New York Daily News reports.

No casting for the remake is in place yet; filming is set to begin early next year. Spielberg was last in theaters with 2008's "Indiana Jones" sequel, Reuters reports.