Actor Jude Law is to become a father for the fourth time. The "Talented Mr. Ripley" star – who already has three children, Rafferty, 12, Iris, eight, and six-year-old Rudy, with ex-wife Sadie Frost – was said to be stunned when the mystery woman phoned him to say she was pregnant following a brief fling at Christmas. 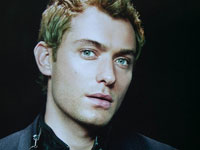 His spokesperson said: "Following a relationship last year, Jude Law has been advised by the birth mother that he is to be the father of a child due in the autumn of this year. "He is no longer in a relationship with her but he intends to be a fully supportive part of the child's life. This is an entirely private matter and no further statements will be made."

The mother-to-be is believed to be around seven months pregnant, reports Ireland Online.

The Mirror has already discovered that the woman is seven months' pregnant and that the baby was conceived during a brief relationship while Law was working in New York on Guy Richie’s forthcoming film Sherlock Holmes.

The actor’s personal life became red-top fodder when he separated from Frost after six years of marriage and became engaged to the much younger Sienna Miller.

He was then forced to publicly apologise to the actress when a tabloid discovered that he was having an affair with the nanny of one of his children.

He has since complained that the paparazzi who frequently trail him are like stalkers, informs Times Online.