Moms could reduce the risk of cerebral palsy by eating magnesium sulfate just before they give birth, a new research showed. 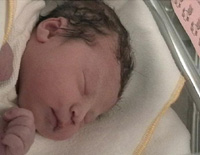 Cerebral palsy (CP) is an umbrella term encompassing a group of non-progressive, non-contagious diseases that cause physical disability in human development.

Cerebral refers to the affected area of the brain, the cerebrum (however the centers have not been perfectly localized and the disease most likely involves connections between the cortex and other parts of the brain such as the cerebellum) and palsy refers to disorder of movement. CP is caused by damage to the motor control centers of the young developing brain and can occur during pregnancy (about 75 percent), during childbirth (about 5 percent) or after birth (about 15 percent) up to about age three.

It is a non-progressive disorder, meaning the brain damage does not worsen, but secondary orthopedic deformities are common. There is no known cure for CP. Medical intervention is limited to the treatment and prevention of complications possible from CP's consequences.

Epsom salts can be used to treat pregnancy-related high blood pressure and to stop early labor. Women who have a risk to give birth to extremely pre-term infant should also consider receiving it.

Another study showed that taking folic acid for a year before pregnancy helps women to prevent early labor.