Victoria Beckham was called the sexiest mom by Victoria’s Secret. 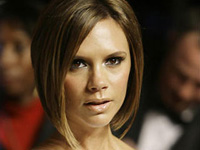 During her rise to fame with 1990s pop group the Spice Girls, she was dubbed Posh Spice, a moniker first coined by the British tabloid press.

Beckham has found more success as an internationally recognised and photographed style icon. She has had a significant career in fashion, designing a line of jeans for Rock & Republic and later designing her own denim brand, dvb Style. Beckham has brought out her own range of sunglasses and fragrance, entitled Intimately Beckham which has been released in the UK and America.

Victoria's Secret is an American retailer of women's wear, lingerie and beauty products. It is the largest brand and a segment of publicly traded Limited Brands with sales surpassing $7 billion and an operating income of US$1 billion in 2006. Victoria's Secret is known for its fashion shows and catalogues, which feature top fashion models.