Museum of Fine Arts seeks to get Kokoschka's ‘Two Nudes’

The Museum of Fine Arts has filed a federal lawsuit to retain ownership of a 1913 oil painting sold during the Nazi occupation of Austria. 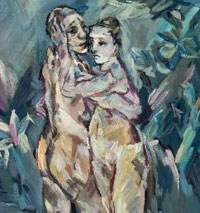 Museum of Fine Arts seeks to get Kokoschka's ‘Two Nudes’

Attorneys for Claudia Seger-Thomschitz, an Austrian woman who claims she is the rightful owner of Oskar Kokoschka's "Two Nudes (Lovers)," say the painting was sold under duress in 1939 by Oskar Reichel, a Jewish physician who ran an art gallery in Vienna.

But the museum claims its research shows the painting was sold voluntarily to another Jew. The painting changed hands several times before being donated to the MFA in 1972, the AP reports.

Oskar Kokoschka was an Austrian artist, poet and playwright of Czech origin, best known for his intense expressionistic portraits and landscapes.

Kokoschka's early career was marked by intense portraits of Viennese celebrities. He served in the Austrian army in World War I and was wounded. At the hospital, the doctors decided that he was mentally unstable. Nevertheless, he continued to develop his career as an artist, traveling across Europe and painting the landscape. He had a passionate, often stormy affair with Alma Mahler, shortly after the death of her infant daughter and her affair with Walter Gropius. After several years together, Mahler rejected him, explaining that she was afraid of being too overcome with passion. He continued to love her his entire life, and one of his greatest works The Tempest (Bride of the Wind) (at right), is a tribute to her. The poet Georg Trakl visited the studio while Kokoschka was painting this masterpiece.

Deemed a degenerate by the Nazis, Kokoschka fled Austria in 1934 for Prague. There he founded the Oskar-Kokoschka-Bund with other expatriate artists. In 1938, when the Czechs began to mobilise for the expected invasion of the Wehrmacht, he fled to the United Kingdom and remained there during the war. With the help of the British Committee for Refugees from Czechoslovakia (later the Czech Refugee Trust Fund), all members of the OKB were able to escape through Poland and Sweden.

Kokoschka became a British citizen in 1946 and only in 1978 would regain Austrian citizenship. He traveled briefly to the United States in 1947 before settling in Switzerland, where he lived the rest of his life.

Kokoschka had much in common with his contemporary Max Beckmann. Both maintained their independence from German Expressionism, yet they are now regarded as its supreme masters, who delved deeply into the art of past masters to develop unique individual styles. Their individualism left them both orphaned from the main movements of Twentieth Century modernism. Both wrote eloquently of the need to develop the art of "seeing" (Kokoschka emphasized depth perception while Beckmann was concerned with mystical insight into the invisible realm), and both were masters of innovative oil painting techniques anchored in earlier traditions.