By Anastasia Tomazhenkova: The king of the red carpet Valentino will show his final collection Wednesday. He has been in business for 45 years. Celebrities, socialites and fashion editors prepared to bid farewell to Italian designer. 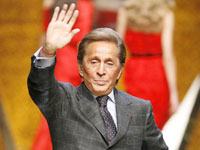 Hollywood stars including Uma Thurman and Gwyneth Paltrow were expected to attend the display, being held in a tent at the Rodin Museum at the close of the Paris spring-summer haute couture shows.

The 75-year-old designer was determined to make it a joyful event, even if some of his fans will inevitably shed tears.

Fashion editors paid tribute to the man who has dressed luminaries from Jackie Kennedy Onassis to Julia Roberts in his trademark scarlet gowns and tasteful couture.

It is difficult to deny that Valentino in his long career has created some of the most sophisticated dresses to be seen and worn, particularly for the evening, the time of the day in which his flamboyant and opulent style has expressed itself at the best, however, when it comes to considering the general output of his work, and its relevance in the history of fashion, things change.

Compared to the influence and innovations of such great masters as Christian Dior, Coco Chanel, Elsa Schiaparelli and ultimately Yves Saint Laurent, Valentino's style can be seen as much more conservative and fixed. His concept of elegance and beauty is basically an exercise in glamour for the sake of glamour itself.

Valentino shares the lifestyle of his jet set patrons. The perma-tanned and impeccably coifed couturier owns homes including a chateau near Paris, a 152-foot (46-meter) yacht and an art collection including works by Picasso and Miro.

"He really understood how rich women wanted to dress," Bailey said. "That is something which sounds so obvious but in fact is very rare, and I think he will be dearly missed."

The French designer brings a welcome wit to his designs, but the gimmicks can distract from the extreme artistry of his made-to-measure creations. Model Coco Rocha hobbled down the catwalk on crutches before unzipping her skintight siren skirt to close the show.

Valentino plans to end with a flourish, showing some 75 outfits - almost twice the amount of a normal show.

He celebrated his label's 45th anniversary in July with three days of parties in Rome, prompting speculation that he was ready to retire following the purchase of Valentino Fashion Group by British-based private equity fund Permira for Ђ2.6 billion (US$3.8 billion).

After repeatedly denying such plans, Valentino and his longtime business partner Giancarlo Giammetti announced in September their decision to step down. Permira has appointed Alessandra Facchinetti, formerly at Gucci, to take over design duties at the label.

Although he will no longer be in the studio, Valentino has a full slate of projects for the coming months.

After a cameo in the 2006 movie "The Devil Wears Prada," he will hit the big screen again in "Valentino: The Last Emperor," a fly-on-the-wall documentary directed by Vanity Fair special correspondent Matt Tyrnauer.

This will be followed by a fashion retrospective in June at the Musee des Arts Decoratifs in Paris. Valentino has strong links with France, where he learned his trade, and will be made an honorary citizen of Paris in a ceremony Thursday.