Today Britney Spears was making a deposition in the custody battle with her ex-husband Kevin Federline. 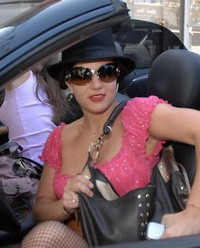 The pop star arrived at the Century City, Calif., office of Mark Vincent Kaplan, who represents K-Fed in the trial. She excited no effort to avoid being traced down.

This time Britney turned up to be law-abiding and consistent in her actions in comparison with earlier tries.

For example, on the evening of January 3, 2008, police were called to Spears's home after she refused to relinquish custody of her children to Federline's people. She was hospitalized at Cedars-Sinai Medical Center after she "appeared to be under the influence of an unknown substance," though blood tests show negative for any illicit substances. She was also held for psychiatric evaluation, and was released from the hospital two days later. On January 14 Commissioner Scott Gordon issued an order stating that Spears's visitation rights have been suspended indefinitely until the custody case goes to trial in April.