Two new job discrimination cases brought to trial in US

By Margarita Snegireva. The Supreme Court on Friday added two new employment discrimination cases to a docket on which such cases are already well represented. 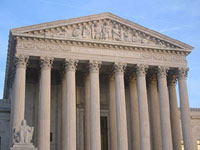 Two new job discrimination cases brought to trial in US

One case concerns protection for employees against retaliation for reporting the discriminatory actions of a supervisor. The other involves age discrimination suits when the employer says that it took an action like laying off a worker for legitimate reasons not related to age.

The justices acted after asking the Bush administration for its views in both cases. The solicitor general’s office, reflecting the policies of the Equal Employment Opportunity Commission, urged the court to grant the cases and to rule for the employees in both.

Employment law has been an unusually active area for the court in recent years. The new age discrimination case is the fifth such case the court has accepted this term, a high number given that the justices will decide fewer than 70 cases.

Employment discrimination laws prohibit intentional discrimination, as well as neutral practices that inadvertently produce a disparate impact on individuals of a particular race or sex, unless there are bona-fide occupational qualifications (BFOQ) that justify such discrimination. Such practices include the use of standardized tests (which may harm minority applicants) or height (which may harm women) in the hiring process, unless these characteristics are required by the position. However, when defending against a disparate impact claim that alleges age discrimination, an employer does not need to demonstrate necessity; rather, it must simply show that its practice is reasonable.

Title VII of the Civil Rights Act of 1964 prohibits discrimination in many more aspects of the employment relationship. It applies to most employers engaged in interstate commerce with more than 15 employees, labor organizations, and employment agencies. Title VII prohibits discrimination based on race, color, religion, sex or national origin. It makes it illegal for employers to discriminate based upon protected characteristics regarding terms, conditions, and privileges of employment. Employment agencies may not discriminate when hiring or referring applicants, and Labor organizations are also prohibited from basing membership or union classifications on race, color, religion, sex, or national origin. A related statute, the Family and Medical Leave Act, regulates discrimination based on pregnancy, childbirth, and some medical conditions.

The Nineteenth Century Civil Rights Acts, amended in 1993, ensure all persons equal rights under the law and outline the damages available to complainants in actions brought under the Civil Rights Act of 1964, Title VII, the Americans with Disabilities Act, and the 1973 Rehabilitation Act.

The Age Discrimination in Employment Act (ADEA), enacted in 1968 and amended in 1978 and 1986, prohibits employers from discriminating on the basis of age. The prohibited practices are nearly identical to those outlined in Title 7, except that the ADEA protects workers in firms with 20 or more workers rather than 15 or more. An employee is protected from discrimination based on age if he or she is over 40. Since 1978, the ADEA has phased out and prohibited mandatory retirement, except for high powered decision making positions (that also provide large pensions). The ADEA contains explicit guidelines for benefit, pension and retirement plans.