US chess grandmaster dies at 64

Bobby Fischer, a chess player who became famous after beating Soviet Boris Spassky, has died at the age of 64. 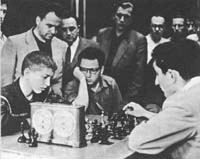 US chess grandmaster dies at 64

No specified illness was the reason of his death.

Robert James "Bobby" Fischer (March 9, 1943 – January 17, 2008) was an American chess Grandmaster. Fischer became famous as a teenager for his chess-playing ability, and in 1972 became the only American chessplayer to become the official World Chess Champion. In 1975 he refused to defend the title when FIDE, the international chess federation, did not accept all his conditions for a title defense. He was subsequently stripped of his title as a result. Fischer is a regular candidate in discussions of who is the greatest chess player of all time.

Fischer never returned to the United States after his 1992 rematch with Spassky. He lived in Hungary and later Japan , where he was detained by Japanese authorities in 2004–2005 after his U.S. passport was revoked. He was granted Icelandic citizenship, and lived in Iceland from 2005 until his death. In the final decades of his life, he became well-known for his anti-American and anti-Semitic statements.