US govt should help those without medical insurance, survey

About 70 percent of Americans say individuals should be required to have medical insurance, with government help for those who cannot afford it. 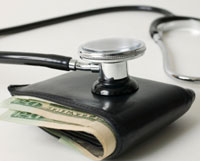 US govt should help those without medical insurance, survey

The Commonwealth Fund carried out a survey which showed that an independent foundation working toward health policy reform, health insurance mandates were supported by 80 percent of Democrats, 52 percent of Republicans and 68 percent of Independents.

The problem of how to provide health insurance to all Americans is one of the top campaign issues being confronted by Democratic and Republican contenders for their parties' nominations to the November presidential election, Reuters reports.

According to the United States Census Bureau, approximately 84% of Americans have health insurance. Some 60% obtain health insurance through an employer, about 9% purchase it directly, and various government agencies provide coverage to about 27% of Americans (there is some overlap in these figures).

In 2006, there were 47 million people in the U.S. (16 percent of the population) who were without health insurance for at least part of that year. About 37% of the uninsured live in households with an income over $50,000. Health insurers have a significant economic impact as employers - in 2004 they directly employed almost 470,000 people at an average salary of $61,409.

According to a 2007 study, about 59% of employers at small firms (3-199 workers) in the U.S. provide employee health insurance, compared to 99% of large employers. The percentage of small firms offering coverage has been dropping steadily since 1999. The study notes that cost remains the main reason cited by small firms who do not offer health benefits.

The types of coverage available to small employers are similar to those offered by large firms, but small businesses do not have the same options for financing their benefit plans. In particular, self-insuring the benefits (see Self-funded health care) is not a practical option for most small employers.

Over time, the effect of initial underwriting "wears off" as the cost of a group regresses towards the mean — the average health status of the group eventually moves towards that of an average group. The process used to price small group coverage changes when a state enacts small group reform laws.