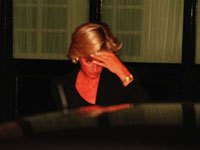 Simone Simmons practices "energy healing". She met Diana in 1993. Simmons told a British coroner's inquest that the princess had shown her two letters from Philip written in 1994 and 1995, near the end of Diana's marriage to Prince Charles.

After her divorce, Diana did a great deal of useful work particularly for the Red Cross and in a campaign to rid the world of land mines. Her work was always on a humanitarian rather than a political level. She was extremely aware of her status as mother of a future King and was prepared to do anything to prevent harm to her sons.

Simmons agreed with a suggestion by a lawyer that the letters "made cruel and disparaging observations about the propriety of the conduct of Diana."

The inquest is examining the deaths of Diana and her boyfriend, Dodi Fayed, in a Paris car crash on Aug. 31, 1997.

Fayed's father, Mohamed Al Fayed, claims the couple were the targets of a conspiracy directed by Prince Philip, the husband of Queen Elizabeth II.