Sean Penn may soon be a single man walking. Robin Wright Penn has filed for divorce from the actor and director, according to media reports. 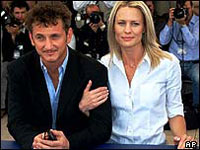 Papers were filed Dec. 21 in Marin County Superior Court. Wright Penn cited irreconcilable differences as a reason for the split, which was first reported by the Web site CelebTV.com.

The couple has two teenage children and are seeking joint custody, the AP reports.

Robin Gayle Wright was born in Dallas, Texas, the daughter of Gayle an Independent Executive National Sales Director for Mary Kay cosmetics, and Freddie Gayle Wright, a pharmaceutical executive. She was raised in San Diego, California.

Robin Wright first became famous on television, playing Kelly Capwell on the soap opera Santa Barbara, which earned her 3 Emmy-nominations. She shot to stardom after her roles as Buttercup in The Princess Bride and Jenny Curran in Forrest Gump, the latter role garnering her a Golden Globe Award nomination for best supporting actress.

Robin Wright was offered the role of Maid Marian in Robin Hood: Prince of Thieves, but had to turn it down because she was pregnant.

In 1996 she married Sean Penn and changed her name to Robin Wright Penn. This name is mentioned in the song Palace & Main by Swedish band Ket.

Wright was involved with actor Sean Penn for over 10 years, marrying on 27 April 1996. Their daughter Dylan Frances was born on 13 April 1991 and son Hopper Jack was born on 6 August 1993. Currently they live in Ross, California; however, on December 27, 2007, the couple's representative announced that the Penns are divorcing. Wright-Penn was previously married to actor Dane Witherspoon from 1986 to 1988. She is the national campaign spokesperson for the Myasthenia Gravis.