Katherine Heigl and musician Josh Kelley have married at a resort in Park City, Utah. 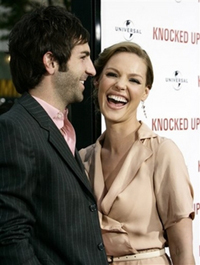 Heigl and Kelley married Sunday in front of a small group of family and friends in a tent outside the Stein Eriksen Lodge, according to CelebTV.com.

The bride and groom wrote their own vows after Katherine walked down the aisle to a song that Josh Kelly had written himself. They exchanged vows under a private tent in the snow.

Heigl was previously in a relationship with actor Jason Behr.In June 2006, she became engaged to singer Josh Kelley, whom she met on the set of his music video for "Only You". In June 2007, she announced that a wedding date had been set and that the couple would marry in October 2007.