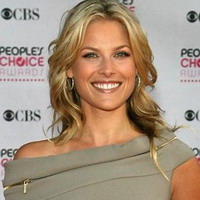 "It happened over the weekend," Larter's publicist, Dominique Appel, told The Associated Press on Tuesday.

Appel did not provide any details.