Victoria Beckham admits her never being good at anything

Victoria Beckham has never been good at anything. 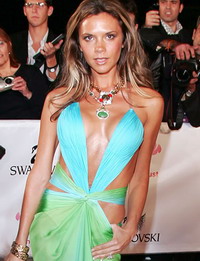 Victoria Beckham admits her never being good at anything

"It became very obvious from the start that I was never going to be the best singer or the best dancer or the best actress," the 33-year-old Spice Girl and wife of soccer superstar David Beckham tells Elle magazine's U.S. edition for its January issue. "You know, I've never been that good at anything, to be completely honest."

On the contrary, she is a natural when it comes to keeping herself in the media spotlight, from her cutting-edge haircut to her high-profile marriage.

The Beckhams and their three young sons moved to Los Angeles this summer when her husband signed to play with the Los Angeles Galaxy.

"I'm very proud to be British, but here it's a lot more relaxed," she says. "It's the happiest as a family that we've ever been. I just love America."

She is now on tour with the newly reunited Spice Girls.

"I wanted my children to see that Mummy was a pop star," she says. "It was the last opportunity for them to stand in a crowd full of people screaming for the Spice Girls."