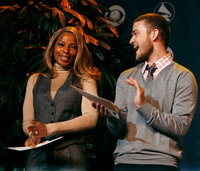 Both West and Winehouse were nominated for album of the year for their CDs, "Graduation" and "Back to Back" respectively. Winehouse was also cited for best new artist, plus record and song of the year for her hit defiant hit "Rehab."

Other record of year candidates included Beyonce's "Irreplaceable," the Foo Fighter's "The Pretender," Rihanna's "Umbrella" and "What Goes Around Comes Around" by Justin Timberlake.

The album of the year category also featured the Foo Fighters, for "Echoes, Silence, Patience & Grace," as well as Winehouse's album. Vince Gill's four-disc set "These Days" was also cited, along with Herbie Hancock's tribute to Joni Mitchell, "River: The Joni Letters," and West's "Graduation."

Besides Winehouse's "Rehab," other song of the year candidates included Corrine Bailey Rae's sweet-sounding "Like A Star," Carrie Underwood's revenge anthem "Before He Cheats," The Plain White T's "Hey There Delilah" and "Umbrella."

Winehouse was competing against Feist, Paramour, Taylor Swift and Ledesi in the best new artist category.