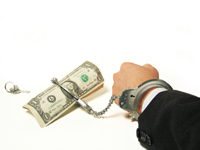 A survey released Thursday said that the more poor people are the more they suffer public corruption – for example, African and Asian people pay brides for police protection, education and justice.

Anti-corruption watchdog Transparency International's 2007 Global Corruption Barometer showed that as a region, Africa suffered the most public corruption. In the African countries surveyed, 42 percent of people reported that they had been asked to pay a bribe to obtain a service during the past 12 months.

The Asia-Pacific region was next with 22 percent; then a grouping of Russia, Moldova and Ukraine with 21 percent; Latin America with 13 percent; southeastern Europe with 12 percent; the European Union with 5 percent; and North America with 2 percent.

"Poor families are hit hardest by demands for bribes," the organization said in a summary of its report.

"This year's Global Corruption Barometer has made it clear that too often, people must part with their hard-earned money to pay for services that should be free," said organization chairman Huguette Labelle in a statement.

The survey of more than 63,199 people in 60 countries, compiled by polling agency Gallup, found that a majority believe corruption in general is on the rise, and they consider politics the most graft-ridden sector.

Slightly less than 70 percent said political parties were the most corrupt institutions, followed by about 55 percent who said parliament or the country's legislature was the most corrupt, narrowly trailed by just over 50 percent citing police departments.

The figures total more than 100 percent because people gave multiple answers about where they paid bribes.

Of the countries and territories where interviews were carried out, Cameroon fared the worst, with 79 percent of respondents saying they had paid a bribe to obtain services. They were followed by 72 percent of Cambodians, 71 percent of Albanians, 67 percent from Kosovo; both Macedonia and Pakistan registered 44 percent.

Romania registered the highest levels of corruption inside the European Union, with one in three Romanians saying they paid bribes in 2007 - a higher rate than last year, before Romania joined the EU, when one in five said they paid bribes, said Victor Alistar, who heads the Romanian branch of Transparency International.

Canada, Japan, South Korea, Austria, France, Iceland, Sweden and Switzerland fared the best overall, with only 1 percent of respondents saying they had paid a bribe. The United States, Denmark, Finland, Ireland, the Netherlands, Portugal and Britain did only slightly worse with 2 percent.

The study found overall that police departments were the most corrupt, with one in four respondents around the world who had contact with police being asked to pay a bribe - and one in six ending up paying up.

Police departments were followed by the judiciary, permit and registration services, the education system and medical services.

"The fact that health and education and the judiciary and the police is where there is a great demand for bribes ... is something we need to look at and be very concerned about, because this is something that touches people every day," Labelle told the AP.

"I think it is extremely worrisome and it is even dangerous to life if people are asked to pay bribes for essential services."

This year's survey was done between June and September 2007. It has been carried out yearly since 2003.