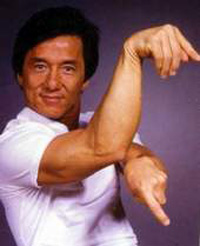 Jackie Chan is promoting condom use and raise AIDS awareness in China in a video clip launched Thursday.

The campaign, entitled "Life is Too Good," includes three TV clips produced by Ruby Yang and Thomas Lennon, who won an Oscar last year for their documentary on Chinese children orphaned by AIDS.

Chan's video emphasizes that while danger is fine for the movies, it's best to play safe in real life.

The United Nations Development Fund, which is backing the campaign, said hundreds of millions of people will see the videos over the next year in airports, on buses and online at www.56.com, a Chinese video-sharing site.

A recent UNAIDS-Chinese government report found that HIV was being passed by sexual content from high-risk groups such as drug users into the general population. About 700,000 people are estimated to be living with HIV in China, with an estimated 50,000 new cases and 20,000 AIDS-related deaths this year.

However, condom use remains low, including among vulnerable groups, such as gay men and sex workers. About 60 percent of sex workers do not use condoms every time, the report found.