ABBA to have its own museum

ABBA fans will go to Stockholm in June 2009 for the opening of a museum dedicated to the Swedish pop group. 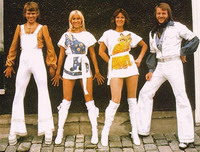 ABBA to have its own museum

Organizers unveiled drawings Wednesday for the ABBA museum, to be built in the Swedish capital and chronicling the quartet's journey to stardom in the 1970s and their split in the early '80s.

The band members - Benny Andersson, Bjorn Ulvaeus, Agnetha Faltskog and Anni-Frid Reuss - are not participating in the project, but have donated their costumes and material for the exhibits.

The 6,500-square-meter (70,000-square-foot) museum will include a dance floor, recording studio and wardrobe for visitors to get a sense of what it was like to be an ABBA member. Karaoke-singing of ABBA songs will be part of the experience, organizers said.

The museum will open with a five-day festival starting June 3, 2009, said the founders - Ewa Wigenheim-Westman and her husband, Ulf Westman.

The band members have received invites to attend the opening - as guests rather than performers - but it was not clear if they would show up.

"We just have to cross our fingers," Ulf Westman said.

ABBA is one of world's most successful bands with album sales of more than 370 million. The group has not performed together since 1982, but continues to sell nearly 3 million records a year.