A former teacher was arrested being charged with violating her probation. She was put under house arrest after having sex with her 14-year-old student. 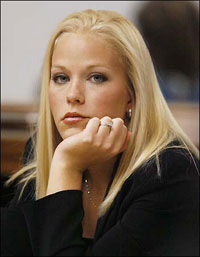 According to a Department of Corrections report, Debra Lafave discussed her personal life and other subjects with a teenage waitress at a restaurant where both worked. One of the terms of her probation was that she was not allowed to have unsupervised contact with minors without permission.

Lafave, 26, is serving three years of house arrest and seven years of probation after pleading guilty to having sex with the boy in a classroom and her home in June 2004.

She was arrested Tuesday morning and released from jail on her promise to appear in court. It was not immediately clear when that hearing would occur.

Defense attorney John Fitzgibbons said he was disappointed that Lafave's probation officer ordered her arrest for what he called an "insignificant" violation. He said Lafave and the 17-year-old girl had a "typical workplace conversation that women have with their women colleagues."

"It was a workplace friendship - no more, no less," he said.

Probation records show Lafave worked at a Tampa-area restaurant until last month, when her probation officer ordered her to quit. She now works as a receptionist at her mother's barbershop.

Fitzgibbons said he and his client were surprised by the arrest. "I don't think anyone felt this was a huge issue," he said.

He said Lafave has done so well on her first two years of house arrest that he plans to ask a judge to convert the final year to straight probation, which is less restrictive.

Other terms of her probation include sex offender treatment, random drug testing and 200 hours of community service, which she has completed.

Lafave pleaded guilty to two counts of lewd and lascivious battery in November 2005. She could face up to 15 years in prison for a probation violation.