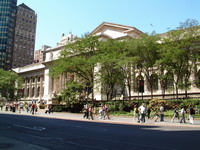 The half dozen pictures were created by two Brooklyn artists, Nora Ligorano and Marshall Reese, as part of a privately financed exhibit called "Line Up" in the main library building on Fifth Avenue.

The dates on each image match days when each official spoke about Iraq in ways the artists consider criminal - with sound clips of them speaking, along with a camera flash going off and a prison door closing.

Some have criticized the library for displaying political satire in an institution that receives public funding.

The library issued a statement saying the exhibition "has no political agenda."

The photographs are part of a larger exhibit called "Multiple Interpretations: Contemporary Prints in Portfolio at the New York Public Library," which will be on display through Jan. 27.