Diana Damrau discourses upon staged performances of Queen of Night

Diana Damrau recalls the Queen of the Night. 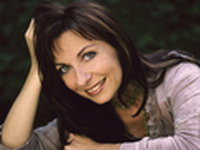 Diana Damrau discourses upon staged performances of Queen of Night

"It's sports. It's like you want to make the world record in a 50-meter race 200 times a year," the 36-year-old coloratura soprano commented about the notoriously difficult-but-short role in Mozart's "Der Zauberfloete."

After Saturday's performance of "Magic Flute" at the Metropolitan Opera, she will retire the part from her repertoire.

She also recently sang her first staged performances of Pamina, the Queen's innocent, inquisitive daughter, becoming the first soprano to fill both roles at the Met in the same season. It is a unique perspective.

"I was booked to sing all the Pamina, and there was a great concert coming up, and I asked the Met if they would consider to release me for the last two performances, and they did," she said over brunch at a restaurant near the Met. "But then the concert didn't happen, and I asked, `Can I have my Paminas back - pleeeeassse?' They said no, `We've already booked another singer but you can sing Queen of the Night if you want.' I already had the farewell Queen in Munich last year ... but that was too big of an offer."

So her farewell Queen will be in New York.

"Queen of the Night is the most spectacular opera character. Every little child knows who the Queen of the Night is," she said. "She has to do fancy things, like flying with costumes over the whole stage. She has the magical power, the dark power, is an evil character. She's frightening. People are afraid, but they also admire her."

Most sopranos who take on the part are so concerned with getting out the famous high notes that they stop, brace themselves on the balls of their feet and clench their hands. When they're done with the notes, they start to move again.

Not Damrau. Her portrayal can be seen on DVDs from the 2003 Covent Garden production with Colin Davis conducting and the 2006 Salzburg production with Riccardo Muti conducting. She's so secure in her technique that she stays in character through the difficult stretches, giving the Queen a believable aura that often is missing.

Ultimately, though, Pamina is a deeper, more complex character, tailing along on the challenges posed to her beloved, Prince Tamino, and the bird-catcher Papageno, all the while straddling the line between love for her mother and the sunny land of knowledge led by Sarastro, the rival her mother wants Pamina to kill.

"Vocally it's an easier night. Absolutely," Damrau said. "But, well, I have the challenge to tell the story of this girl becoming a woman, a real journey, with also exams she has to pass. The boys know they are tested. Pamina, they put some hard tests on her, too."

Damrau also has a life beyond "Flute." She sang Zerbinetta in Strauss' "Ariadne auf Naxos" for her Met debut in 2005, dominated long stretches of "Die Aegyptische Helena (The Egyptian Helen)" as Aithra this year and is scheduled for Konstanze in Mozart's "Die Entfuehrung aus dem Serail (The Abduction from the Seraglio)" next spring.

Her resume is filled with prominent accomplishments, such as Salieri's "L'Europa Riconosciuta" at the reopening of Milan's Teatro alla Scala in 2004; the world premiere of Lorin Maazel's "1984" in London; and the opening concert of last year's World Cup. She endured the 2005 Doris Doerrie production of Verdi's "Rigoletto" at Munich's Bavarian State Opera, where the opera was set on the Planet of the Apes and Damrau's Gilda was dressed as Princess Leia from "Star Wars."

Damrau wants to drift from coloratura to more lyric parts, and is looking ahead to four role debuts in 2009: Donna Anna in Mozart's "Don Giovanni," Aminta in Strauss' "Die Schweigsame Frau (The Silent Woman)," the title role in Massenet's "Manon" and Marie in Donizetti's "La Fille du Regiment."

This month marked the release of her first solo recording for Virgin Classics, "Arie di Bravura."

Born in Germany, she makes her home in Vienna, Austria, these days. But because of her busy calendar, she's not there often. "The storage," she calls it.

In the 11 years since her career took off, she's spent a lot of time on the road.

"This is wonderful," she said. "Who has the possibility through their job to spend, l don't know, altogether maybe two years in London, then you go two months to Milan, two months to Madrid, two months to Paris, just experience these countries and the normal daily life. You live actually there."