Nobel laureate Guenter Grass will bring the publisher of his biography to trial for claiming that he voluntarily joined the Nazis' murderous Waffen-SS unit during World War II. 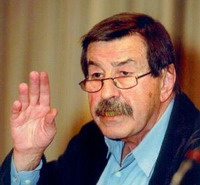 Paul Hertin said he filed a request for an injunction against Random House - which owns the biography's publisher Goldmann Verlag - earlier this week at a regional court in Berlin. It contained an affidavit by the 80-year-old writer in which he contends he was drafted to the SS and did not join the service voluntarily, Hertin said.

It was not clear exactly what the injunction would require the publisher to do.

In Michael Juergs' biography "Guenter Grass," which was published in an updated version in October, the author writes that "Guenter Grass admitted ... that as a 17-year-old he volunteered to join the Waffen-SS," Spiegel Online reported on Friday.

Grass, who became a voice of morality in postwar Germany for urging Germans to confront their World War II-era crimes, dropped a bombshell in his 2006 memoir when he revealed that as a teenager he had fought in the elite Waffen-SS, the combat arm of the Nazis' most fanatical organization.

In his affidavit Grass writes that "as a 15-year-old I volunteered in Gotenhafen to join the Wehrmacht. In fact I wanted to serve on a submarine or alternatively a tank unit," Spiegel Online reported. "This has nothing to do, directly or indirectly, with volunteering for the Waffen-SS. I was enlisted with the Waffen-SS without my active cooperation only when I received the notification of the draft in autumn 1944."

Rainer Dresen, a legal adviser for Goldmann Verlag was quoted by Spiegel Online as saying, "What is missing is a clear and simple statement: I did not volunteer to join the Waffen-SS."

He said that the publisher would not withdraw the book from sale until there was a court decision.

Hertin said that the case would not be heard before next March. A spokeswoman for the Berlin court could not immediately confirm that the court had received Grass' request by Friday evening.

According to Spiegel Online, the first version of Juergs' biography about Grass did not contain the controversial wording and the author added it only after Grass' revealed his SS service in his 2006 autobiography "Peeling the Onion."

Grass, who won the 1999 Nobel Prize for literature and is the author of the classic "The Tin Drum" and many other writings, served in the 10th SS Panzer Division, which fought Soviet troops in eastern Germany near the end of the war. He was wounded and then taken prisoner by U.S. forces.

His confession last summer prompted calls for him to return the Nobel Prize.

Grass has expressed shame at having been part of the organization and said earlier he was making the admission because "it weighed on me."