If you were an editor at a London-based magazine looking for a glamorous spot to anchor the photo layout unveiling the Spring 2008 men's fashions from high-end designers like Versace and Armani, what would you chose? 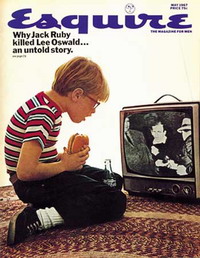 The choices for a venue could include places like Milan , Paris , Monte Carlo or somewhere in the tropics.

But the British edition of Esquire Magazine opted for a more unusual location: College Station . The rural Texas town is best known as the hometown of Texas A&M University, a school founded on farming and engineering where one is more likely to see boots and jeans than Dolce & Gabanna.

"We do realize that," said Philip Toledano, a photographer and part of the Esquire photo team that spent much this week on the campus. "That's part of the thing. It's a nice juxtaposition. Contrast is always interesting, particularly in art."

For the March issue, the photo crew, a hunky model and the magazine's fashion director invaded the Brayton Fire Training School, a renowned firefighter training site run by the Texas Engineering Extension Service at the far edge of the sprawling A&M campus about 100 miles (160 kilometers) northwest of Houston.

With the goal of filling a 10-page spread in one of the magazine's largest editions of the year, Vancouver-born model Matt Gontier was photographed as he perched on the edge of wrecked trains, scrambled through piles of debris and dashed amid smoke from a flaming tanker - a la James Bond - and all without rumpling any of the $2,000 (1,350 EUR) suits brought from London.

Even his coat remained buttoned.

"It's a journey though the apocalypse, I guess, or some form of it," Toledano said of his theme.

He could have been speaking about the previous night, when he and Gontier and some other members of the team ate dinner at a barbecue chain called Texas Roadhouse, where chicken fried steak and catfish share the menu with a dish of beef smothered in onions that's known as "Roadkill."

"All those waitresses were in a line dance," a disbelieving Toledano said.

Toledano, 38, born in London but now living in New York , was in College Station about a year ago for an assignment for another magazine that brought him to the fire school, the largest live-fueled fire training facility in the world. He thought a fashion spread using the training site as a backdrop would be terrific and pitched the idea to Catherine Hayward, Esquire's fashion director.

"I ran it by my editors," she said. "This is a big issue, March and September in the magazine world. It's the beginning of a new season, with new-season tailoring."

The school, with a section of it known as Disaster City , offered "the kind of vibe we wanted," she said. "We also wanted something quite odd and quirky. The area came by the name because it is where simulated disasters like train wrecks and building collapses are staged.

"'Apocalyptic' is the word we've been using," she said, echoing Toledano.

Hayward did an Internet search for Disaster City , found a phone number, made a call and got approval.

"It's not a run-of-the mill fashion shoot, which can be a bit boring," she said as Gontier was enveloped in white smoke from a fog machine. Flames from a burning tanker spewed black smoke behind him, all under the watchful eyes of a fire crew hosing the tanker with water - and out of sight of Toledano's camera.

One bystander remarked the camera probably cost more than his pickup truck.

"How much polyester in the clothing?" the school's training coordinator Brian Smith cautioned Gontier. "Polyester melts."

The bigger question is whether a Versace suit even contains polyester.

"We've got to have lunacy," Toledano said, directing the model. "That's going to make the whole thing."

The idea of haute couture in College Station is not that lunatic, said Cheryl Bridges, director of Texas A&M's Center for Retailing Studies.

"Fashion shoots quite often are in the most unlikely places," she said. "It has to do with the feeling of whatever the designer or photographer is trying to get. And very often they try to pick offbeat places."

Not that College Station is offbeat, she added.

"We're definitely a college town," she said. "And yes, the perception of a university town is jeans and T-shirts. And that is what you usually see day in and day out."

Even on fashion models.

Gontier shed his gray plaid designer suit, with matching shirt and tie, and donned black jeans and a white sleeveless T-shirt. His closet was the rear of a rented minivan. His dressing room was a dirt and gravel parking lot.

He would change again, maybe into something from Savile Row.

A train wreck was waiting in Disaster City .

"It is really kind of absurd," Jay Socol, communications director for the Texas Engineering Extension Service, said. "But it's fun to watch."