'Girls Gone Wild' producer slaims to be abused in jail 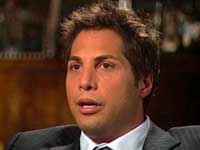 'Girls Gone Wild' producer slaims to be abused in jail

Oklahoma jail guards were accused by the millionaire producer of the "Girls Gone Wild" adult video series of abusing him, a newspaper reported Friday.

Guards at the Grady County Law Enforcement Center denied Joe Francis food and blankets and threatened to strap him naked to a chair for 48 hours, Francis' attorneys alleged last month in court papers seeking his release on bail in a Florida case, The Oklahoman reported.

Francis, 34, was held at the jail from May 17 to June 4 while being moved from a Florida jail to a federal facility in Reno, Nevada, where he is awaiting trial next year on a tax evasion charge.

Grady County officials denied the accusations, telling the newspaper that guards never threatened to strap Francis to a chair, that Francis had an extra blanket he should not have had confiscated and that his transfer was delayed because his family had somehow found out when he was to have been moved, creating a potential security risk.

"Mr. Francis was treated like every inmate that comes through the Grady County Law Enforcement Center," jail administrator Shane Wyatt told the newspaper.

Francis' attorneys declined a request from the newspaper to discuss the allegations.

Francis has made millions of dollars with the "Girls Gone Wild" videos, which feature young women in sexually provocative situations.

He has been in jail since April, when he was cited for contempt after yelling at attorneys during mediation in a federal lawsuit brought by women who were underage when his production company filmed them in 2003.

That lawsuit has since been settled, but Francis' bond was revoked on criminal charges related to the 2003 filming when he was charged with having contraband - $700 (EUR472) and prescription anti-anxiety medication - in the Bay County jail.

Federal officials then extradited him to Nevada to face tax evasion charges.