Sen. John Kerry has personally accepted a Texas oilman's offer to pay $1 million (680,000 EUR) to anyone who can disprove even a single charge of the Swift Boat Veterans for Truth. 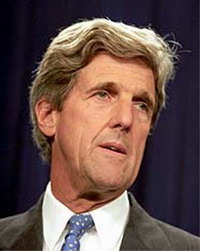 In a letter to T. Boone Pickens, the Massachusetts Democrat wrote: "While I am prepared to show they lied on allegation after allegation, you have generously offered to pay one million dollars for just one thing that can be proven false. I am prepared to prove the lie beyond any reasonable doubt."

Kerry, a Navy veteran and former prosecutor, said he was willing to present his case directly to Pickens, who provided $3 million to bankroll the group during Kerry's race against President George W. Bush.

Kerry said he would donate any proceeds to the Paralyzed Veterans of America.

The senator said Pickens issued the challenge Nov. 6 in Washington, while serving as chairman of a 40th anniversary gala for American Spectator magazine.

In the letter, Kerry offered to travel to Dallas to meet with Pickens in a public forum or to invite him to come to Massachusetts. He suggested the two could visit the Paralyzed Veterans of America in Norwood to see firsthand how Pickens' money could be used to help veterans. A copy of the letter was provided to The Associated Press.

First in the book "Unfit for Command," and then in a series of television commercials sponsored by a group calling itself Swift Boat Veterans for Truth, Kerry's critics challenged the circumstances for his military awards, accused him of doctoring reports and argued he never traveled into Cambodia as claimed. In the Vietnam War, Kerry commanded a Swift Boat, a small high-speed patrol boat on Vietnamese rivers.

While fellow veterans and reporters disproved many of the group's claims at the time, Kerry refused to air ads responding to the criticism. His own response was muted for fear of legitimizing his critics' attacks. The senator conceded after losing to Bush that his lackluster response likely cost him the election.

Ever since, Kerry has worked to lay the criticisms to rest.

In May 2005, he began allowing reporters access to his full Navy personnel and medical records - something he refused to do during the campaign.

Those records mostly duplicated documents Kerry released during the 2004 campaign. In addition, they included numerous commendations from commanders who criticized Kerry's service during the presidential race.

That disclosure renewed questions about why Kerry did not respond more forcefully with control over the White House at stake.

Kerry decided against launching a second bid for president, but vowed to defend his record and prevent other candidates from being "Swift-boated."

In his letter to Pickens, the senator challenged the billionaire's honor.

"I trust that you are a man of your word, having made a very public challenge at a major Washington dinner, and look forward to taking you up on this challenge," Kerry wrote.