Katie Couric goes on her rivalry with Dan Rather

Today's ripest feud is a purely CBS affair: Katie Couric versus her predecessor Dan Rather. 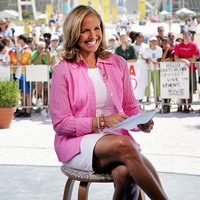 Katie Couric goes on her rivalry with Dan Rather

The rivalry took a humorous turn Thursday when a video was posted on the Web showing Couric mocking Rather while preparing to anchor a broadcast from Nashville, Tennessee, last week.

A video of Rather had surfaced last month, showing the former "CBS Evening News" anchor obsessing over his appearance before a remote broadcast - particularly questioning the wearing of an overcoat.

"I'm going to be like Dan Rather on YouTube," joked Couric in her video, alluding to Rather by fiddling with her coat. "Geez, don't you think he deserves a little payback?"

She then added, laughing: "This tart is ready to go!"

Rather, who left CBS News in March 2005 and now works for HDNet, had referred to his successor as "a nice person," but said "the mistake was to try to bring the `Today' show ethos to the `Evening News,' and to dumb it down, tart it up in hopes of attracting a younger audience."

Couric left her job as host of the morning "Today" talk show last year. In September 2006, she became the first woman to regularly anchor of the three network nightly newscasts on her own.

Jen Farley, a spokesman for CBS, would not comment on whether someone from CBS had supplied the video, but said it could have come from any number of places, including CBS affiliates, which receive pre-broadcast footage.

"It was from an open satellite from a location in Nashville," said Farley.

The timing of the video coincides with a legal battle between Rather, who now does the show "Dan Rather Reports" for cable station HDNet.

Rather is suing CBS Corp. for $20 million (13.65 million EUR) in compensatory damages and $50 million (34.13 million EUR) in punitive damages, claiming his bosses made him a "scapegoat" for the controversy that arose over a discredited story about President George W. Bush's military service.

CBS on Thursday asked a judge to dismiss the defamation lawsuit filed against the network and its parent company, Viacom Inc., arguing that he waited too long to take legal action.

Rather did not immediately return a call from The Associated Press on Friday.