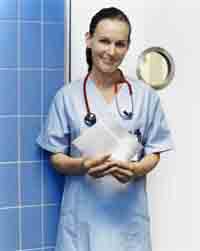 Municipal authorities would be given emergency powers to order nurses back to work if they fulfill threats to resign next week over stalled labor talks, according to a new Finnish bill.

Finnish lawmakers on Friday passed a bill giving municipal authorities emergency powers to order nurses back to work if they fulfill threats to resign next week over stalled labor talks.

Some 12,000 nurses and other health care workers have threatened to resign on Monday if no agreement is reached in talks between employers and unions. Their demands include a 24-percent wage increase.

Lawmakers supporting the bill said the resignations would cripple Finland's health care system and pose serious threats to the health of patients.

In anticipation, some hospitals have already started to reduce their operations and are prepared to send patients needing urgent help, such as pregnant women, to neighboring Sweden and other countries.

The bill was passed in a 113-68 vote in the 200-seat Parliament. The remaining legislators were absent or abstained during the vote. President Tarja Halonen was expected to sign the emergency measure into law later Friday.

The bill gives municipal authorities the right to compel some nurses and health care workers with crucial hospital functions to return to work or be fined.

There was no immediate reaction from the Union of Health and Social Care Professionals to the bill being passed, but it had earlier said the nurses would resign regardless.

It has also said an additional 3,600 union members have pledged to hand in their resignations later this year if the labor talks are not resolved, bringing the total figure to more than 15,000 nurses and health workers.

The majority of those involved work at public hospitals, but some are employed in private health care services.