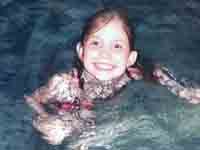 Parents of a 6-year-old girl who lost a part of her intestine because of sitting on an open drain in a wading pool is suing the pool manufacturer and the country club where the accident happened.

Abigail has been hospitalized twice, each time for about a month, since the June 29 accident.

"Her attitude couldn't really be any better," said her father, Scott Taylor. "She is an amazing girl. ... She doesn't get down on herself. I think sometimes, Katey, my wife, and I have a harder time with this than she does going through it."

Abigail is walking and wears a backpack with one tube carrying nutrients to her chest and another tube carrying predigested food to her stomach. She wears a colostomy bag and attends school with a nurse who accompanies her 12 hours a day, Taylor said.

The lawsuit alleges that Abigail was playing in the kiddie pool when she fell and landed on the uncovered suction outlet. She became trapped when the sump created a vacuum and her intestines were pulled out through her rectum, the suit says.

Taylor said the lawsuit was necessary to provide for his daughter's future medical costs.

"It's a life-changing event, and our insurance is probably going to run out next year," he said. "In addition to that, it would be my hope that the manufacturer of this cover would change their product and take this one off the market."

Bennett alleges that Sta-Rite knew that its suction cover was a hazard and failed to come up with a safer product. The lawsuit cites three previous disembowelments caused by Sta-Rite equipment.

It also accuses the Minneapolis Golf Club of failing to properly install the cover and frame, failing to inspect it and failing to close the pool when the cover came off on the day of the accident.

Pentair issued a statement blaming the country club for its "misuse of its pool products, inadequate site supervision and improper maintenance." The company said a golf ball lodged in a pool pipe, creating the suction that led to the accident.

Dan Haws, an attorney for the country club, denied that a golf ball got stuck in the pipe. He said the drain cover had been in place shortly before the accident and was installed the same way for about four years and had never before come loose.

Several states have passed pool-safety laws after children drowned or were disemboweled by drain suction. North Carolina, for instance, requires pools to have dual drains to diffuse the force of the suction and prevent children from being trapped.