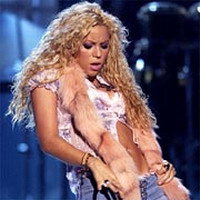 The show's Sin City debut was slated to feature a mixed bag of performances, from award nominees to Las Vegas Strip staples such as the Blue Man Group.

Guerra, who received the Latin Recording Academy's Person of the Year award Wednesday night, led the field with five nominations, including album of the year and merengue album for "La Llave De Mi Corazon."

The singer-songwriter, credited with popularizing the bachata dance rhythms outside his native Dominican Republic, also was up for record of the year, song of the year and tropical song for the album's playful, upbeat title track.

Close behind on the trophy hunt were Martin and reggaeton duo Calle 13, each with four nominations.

Martin, slotted to open the show performing with Blue Man Group, was vying for album of the year, male pop vocal album and long form music video for his "MTV Unplugged" album. "Tu Recuerdo," a ballad off the album, was a contender for record of the year.

Calle 13's big breakout year was 2006, when the duo took home three Latin Grammys for their debut. This year, their politically charged follow-up, "Residente o Visitante," had the Puerto Rican group in the running for album of the year and urban music album.

One track, "Pal Norte," on which the group highlights hardships faced by immigrants trying to enter the U.S. illegally, was up for the urban music song trophy. The duo also was a contender in the music video category for "Tango del Pecado."

Among the other contenders for record of the year were a couple of star-powered duets: Shakira and Beyonce's bouncy "Bello Embustero" and Bose and Paulina Rubio's poppy "Nena." Argentine rocker Gustavo Cerati rounded out the category with his garage rock anthem, "La Excepcion."

The show, being held at the Mandalay Bay Events Center, marked the first time Las Vegas landed the Latin Grammys. The show was held in New York last year and has previously bounced between Miami and Los Angeles.

Las Vegas' aura as a party town has made it a popular destination for high-profile award shows in recent years. In May, country music stars converged here for the Academy of Country Music awards. Most recently, it played host to the MTV Music Video awards.

The Latin Grammys were taking things a step further. Apart from the Martin-Blue Man Group performance, the telecast was incorporating Vegas showgirls from the long-running Tropicana Resort & Casino's "Folies Bergere," and elements from more contemporary shows such "HavanaNightShow" and "Stomp Out Loud."

The awards spanned 49 musical categories, with most of the trophies to have been handed out during a pre-show prior to the nationally televised program.