Rapper T.I. has dropped his request for a judge's permission to host a Thanksgiving Day celebration. 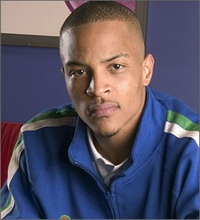 The 27-year-old rapper, whose real name is Clifford Harris Jr., was arrested Oct. 13. Federal authorities allege the rapper tried to buy machine guns and silencers in an Atlanta parking lot just blocks from the BET Hip-Hop Awards, which he was to headline later that night.

His lawyers asked Tuesday that a list of family members be granted "approved visitation to have dinner with the defendant" Nov. 22 between 9 a.m. and 6:30 p.m. The monitoring service that is supervising his release would be present.

But on Thursday, the rapper's lawyers dropped the request, citing opposition from prosecutors. "In light of the government's opposition said motion is withdrawn," the motion read.