Her husband, John Lennon, called her the world's most famous unknown artist. Yoko Ono, the widow of one of The Beatles founders, will show about 80 of her works in an exhibit opening this weekend in South America's largest city. 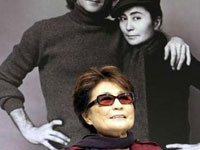 Ono also will take part in a theatrical performance dubbed "A Night with Yoko," organizers said.

"When I'm invited to perform in other countries, I always have doubts on whether I should go," Ono said Wednesday, according to the Web site of the daily O Globo. "But after showing my work, I feel like I can affect people."

Some of the works are from the 1993 exhibit "Blood Objects," including portrait frames, round glasses such as the ones used by Lennon and a blood-tainted T-shirt symbolizing urban violence.

The exhibit was previously shown in Norway and Switzerland.

"I was in Japan during World War II," she said. "Wars are not necessary. We can negotiate."