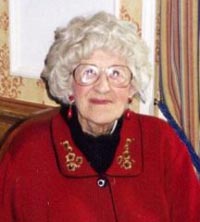 One of the last two survivors from Titanic - Barbara West Dainton – has died at 96.

She died Oct. 16 at a nursing home in Camborne, England, according to Peter Visick, a distant relative. The funeral was held Monday at Truro Cathedral, Visick said Thursday.

Elizabeth Gladys Dean of Southampton, England, who was 2 months old at the time, is now the disaster's only remaining survivor, according to the Titanic Historical Society.

Born in Bournemouth in southern England in 1911, Dainton was too young to remember the night the huge liner hit an iceberg and sank beneath the Atlantic in April 1912, killing 1,500 people, including her father, Edwy Arthur West.

He waved farewell as the lifeboat carrying Barbara; her mother, Ada, and her sister, Constance, was lowered into the ocean, according to Karen Kamuda of the Titanic Historical Society in Indian Orchard, Massachusetts. His body was never identified.

The Titanic did not have enough lifeboats for all of 2,200 passengers and crew. Only a small number of those unable to find a place on the boats survived the freezing waters.

Dainton returned to England after the accident. She married in 1952.

She avoided publicity associated with the Titanic and even insisted that her funeral take place before any public announcement of her death, Kamuda said.

"We respected her privacy," Kamuda said. "We're so open with everything and our emotions nowadays, but people at that time, they just didn't talk about it."