Heather Mills McCartney said Thursday that she is feeling better after venting her rage against estranged husband Paul McCartney and the media in a series of television interviews last week. 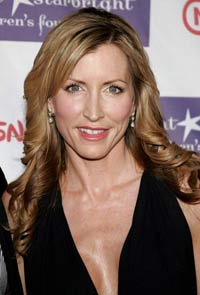 She also said that she is not upset that McCartney has been photographed kissing an American woman, Nancy Shevell. "It's none of anybody's business what happens in Paul's love life," she said.

The couple separated last year and are in the process of negotiating terms for their divorce.

In interviews last week, Mills McCartney had accused the former Beatle of failing to protect her and their 3-year-old daughter, railed against press coverage and announced a campaign to get European legislation to curb news media.

Returning Thursday to GMTV, she said she has received much support for her campaign.

"It's been unbelievably cathartic. It's the difference between being in prison and being on parole," she said.

"I've had 18 months of the worst press ever and I got the chance to protect myself and my daughter."

"A little girl came up to me and said, 'you made me cry last week,' and I felt bad," Mills McCartney added. "I said 'I didn't want to make you cry' and she said, 'I hate those bullying newspapers, I'm never going to buy a newspaper."'