Comedian Stephen Colbert rejected his bid for the White House. 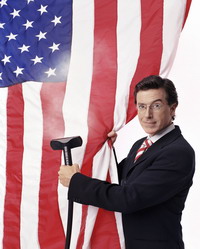 His announcement came after the South Carolina Democratic Executive Council voted last week to keep the host of "The Colbert Report" off the state's primary ballot. The vote was 13-3.

Colbert poses as a conservative talk-show host on the Comedy Central show.

"Although I lost by the slimmest margin in presidential election history - only 10 votes - I have chosen not to put the country through another agonizing Supreme Court battle," Colbert said Monday in a statement. "It is time for this nation to heal."

"I want to say to my supporters, this is not over," Colbert said. "While I may accept the decision of the Council, the fight goes on! The dream endures! ... And I am going off the air until I can talk about this without weeping."

In reality, "The Colbert Report" was going off the air because of a strike by Hollywood writers that began Monday. Many talk shows were expected to be shown in repeats during the strike.