Court decides fate of man who killed his wife and judge 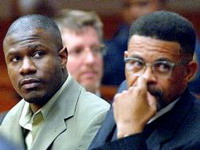 Court decides fate of man who killed his wife and judge

A man charged with killing his wife and shooting the judge who was handling their bitter divorce pleaded guilty Monday, bringing an abrupt end to his trial.

Darren Mack, 46, pleaded guilty to first-degree murder and entered an Alford plea to a charge of attempted murder. Under an Alford plea, a defendant acknowledges there is enough evidence for a conviction, but does not admit guilt.

Mack was on trial for the June 12, 2006 stabbing death of his estranged wife, Charla. Authorities said after the killing, Mack drove to a downtown parking garage and shot Washoe Family Court Judge Chuck Weller through the third-floor window of the judge's chambers. The judge survived.