Randall Forsberg, the founder of the nuclear freeze movement advocate of the largest-ever demonstration against nuclear weapons in 1982, has died at age 64. 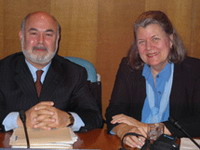 Forsberg launched the anti-nuclear movement with a paper she wrote while obtaining a doctorate in international studies at Massachusetts Institute of Technology. The paper, "Call to Halt the Nuclear Arms Race," described the devastation that the weapons possessed by the United States and the former Soviet Union could wreak on the world, and called for both countries to stop testing and making nuclear weapons.

On June 12, 1982, after dozens of towns and state lawmakers had passed nuclear freeze propoals, more than 700,000 people led a no-nukes march through Manhattan and Central Park.

The movement waned in the mid-1980s when President Ronald Reagan was re-elected and pushed for a buildup of military weapons and the creation of a "Star Wars" missile defense shield.

Forsberg founded and headed the Institute for Defense and Disarmament Studies for nearly three decades after that in Brookline, Massachusetts, and served as an advisor to two presidents on arms control issues. She received a MacArthur Foundation "genius" grant in 1983.

Forsberg first learned about nuclear weapons while working as a typist at the Stockholm International Peace Research Institute in Sweden in the 1960s, reading reports about the breakdown of talks between the U.S. and Soviets in 1963.

She was a write-in candidate for the Senate in Massachusetts in 2002, challenging Democrat John Kerry to protest his vote authorizing military action against Iraq.

"She will be remembered as a peacemaker," her sister said. "What's most important is that she believed it was possible to end international war. And I think she was right."

Forsberg is also survived by her mother and a daughter.