J.K. Rowling has written her first book after her wildly popular series on teen wizard Harry Potter - an illustrated collection of magical fairy stories titled "The Tales of Beedle the Bard." 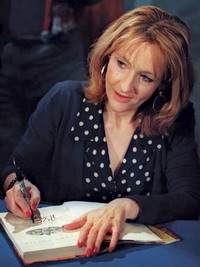 Only seven copies of the handwritten book have been made, Rowling said Thursday. One will be auctioned next month to raise money for a children's charity, while the others have been given away as gifts.

Rowling drew the illustrations herself and provided the handwriting for the five stories that make up the collection of fairy tales.

"'The Tales of Beedle the Bard' is really a distillation of the themes found in the Harry Potter books, and writing it has been the most wonderful way to say goodbye to a world I have loved and lived in for 17 years," Rowling said in a statement.

The volume, bound in brown morocco leather and mounted with silver and semiprecious stones, will be auctioned at Sotheby's on Dec. 13 with a starting price of 30,000 pounds (US$62,000; 43,000 EUR). Proceeds will go to The Children's Voice, a charity that helps vulnerable children across Europe.

Rowling told the British Broadcasting Corp. that the book of fairy tales had helped her say goodbye to Harry's world.

"It's not about Harry, Ron and Hermione, but it comes from that world," she told BBC radio in an interview broadcast Thursday. "So it's been therapeutic in a way."

Rowling said she was working on a new book, "a half-finished book for children that I think will probably be the next thing I publish."