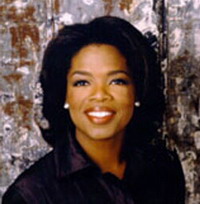 The Oscar-winning actress let the talk-show host chop off a little more than 9 inches (23 centimeters) of her hair during a segment that was to air Friday on "The Oprah Winfrey Show."

The TV shearing was done in the name of charity: Swank, 33, donated her locks to Pantene Beautiful Lengths, which works with the American Cancer Society to provide wigs at no charge to women suffering from hair loss caused by their cancer treatments.

"Well, it's taken months to get to this moment," Winfrey says before getting down to business. "It involves a two-time Academy Award winner, a sharp object and me."

Swank, who won Oscars for her roles in "Boys Don't Cry" and "Million Dollar Baby," says she "wanted to find a way to give back."

"I've been growing it for the last six months to donate my hair," she says. "I've been taking a lot of vitamins and taking really good care of it knowing that it would go to a woman in need."