An Italian woman lay in a coma after an attack that has prompted Italy to order the expulsion of any European Union citizen deemed dangerous. 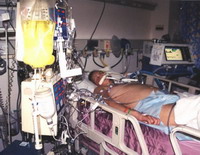 "Horror in Rome" read the front-page headline in Il Messaggero, a daily newspaper in the city. "End of tolerance," began an accompanying editorial.

"We are not acting out of rage but we are determined to keep a high and just level of security for our citizens," Prodi said.

The woman, who is 47 and the wife of an Italian naval commander, was attacked as she walked along a road after dark Tuesday toward the barracks where she lives, police said. She was beaten, dragged through mud and left half naked in a ditch.

The crime has been blamed on a Romanian who lived in a Gypsy camp. Romania joined the European Union earlier this year.

The woman "was unconscious, breathing with difficulty," said Roberto Fornaiolo, one of the policemen who found the woman.

"She was covered with mud because she was dragged across the ground. At first we couldn't make out the bruises because there was so much blood on her face," Fornaiolo said, adding that the woman's pants and underwear had been pulled down.

News reports said the woman appeared to have been sexually attacked but investigators could not immediately be reached confirm this. The suspect in the case, a Romanian in his 20s identified as Nicolae Mailat, had scratches on his back, police said.

Sant'Andrea hospital said the woman not responding to stimuli but that tests showed brain activity.

Police arrested Mailat, who lived in a shack in the camp, one of several sprawling settlements on the outskirts of Rome where thousands of residents - some legal, some not - live in hovels or trailers. Many are from Romania or the former Yugoslavia.

Police said dozens of shacks would be knocked down as part of the crackdown.

Italian news reports said Mailat had been given a three-year prison sentence in Romania for theft but had disappeared before he could be jailed.

A series of violent crimes in the capital has been blamed on Romanians in recent months. Oscar-winning director Giuseppe Tornatore was hospitalized over the summer after he was punched in the jaw by one of two muggers in an upscale neighborhood.

Other attacks, including the mugging in August, allegedly by three Romanians, of a cyclist along the Tiber earlier this year, have shocked Rome, where street violence has long been unusual. The cyclist died in early October after weeks in a coma.

Opinion polls have showed that Prodi's popularity is low and that citizens are linking violent crime to immigrants. The right-wing opposition has used the violence to lambast leftist politicians, particularly Rome Mayor Walter Veltroni.

Gianfranco Fini, an ally of the conservative former Premier Silvio Berlusconi, said his right-wing National Alliance party would back the government's decree. But he said the party would push for even stiffer action, including the power to expel EU citizens who do not have income to support themselves.